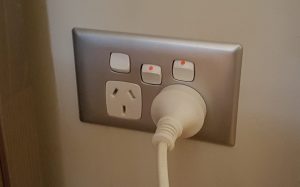 This evening I plugged my laptop into grid-power at home for the first time in more than a month. I’ve been putting my homebrewbattery to work in a test challenge to see if I can use stored solar energy to charge all of my tech devices. For about 5 weeks I’ve been using my solar-charged battery exclusively to charge my laptop, phones, tablet, cameras, and headtorches. In that time I’ve charged almost 5 kWh into the battery from my poorly-placed solar panel – so I’ve saved more than $1!

To make this challenge more achievable, I wired the battery inverter into a power outlet inside the house. Since my inverter is a small cheap one that is more intended for caravans, it has a noisy fan and I didn’t want to leave it running continuously. I used a power socket with an extra switch, that was wired in to remotely turn the inverter on and off. That part of the project worked superbly.

In fact, the cheap inverter produces “modified sine wave” output (unlike the true sine wave of grid power). This can be harmful for some types of electronics, and so I initially connected USB chargers and my laptop power supply rather gingerly. They mostly seem to work, although I have had problems with some of them power cycling while connected to the inverter. I wanted to get to the bottom of this, but it seemed rather erratic. Sometimes my phone would charge properly in a single burst while connected, and then at other times the USB charger would reset every few minutes causing an interruption in my phone charging session.